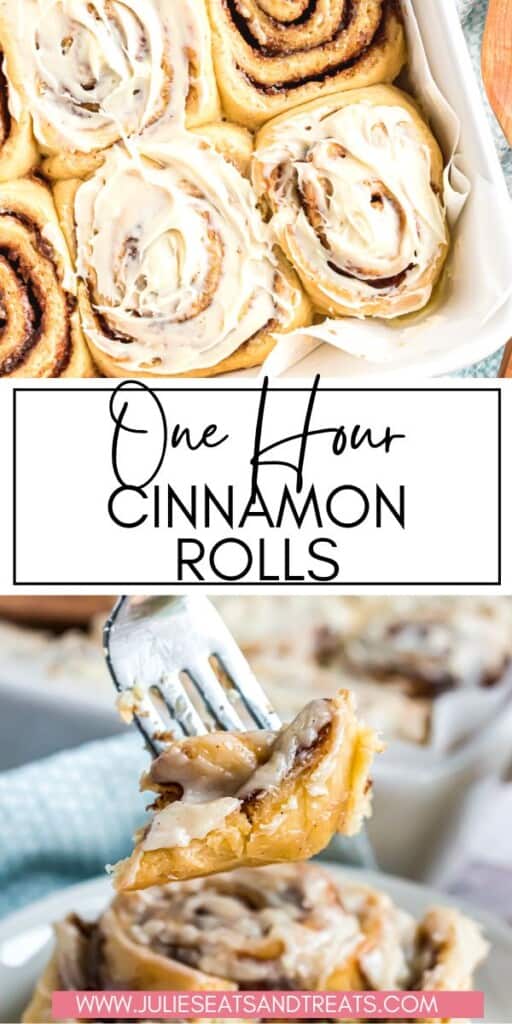 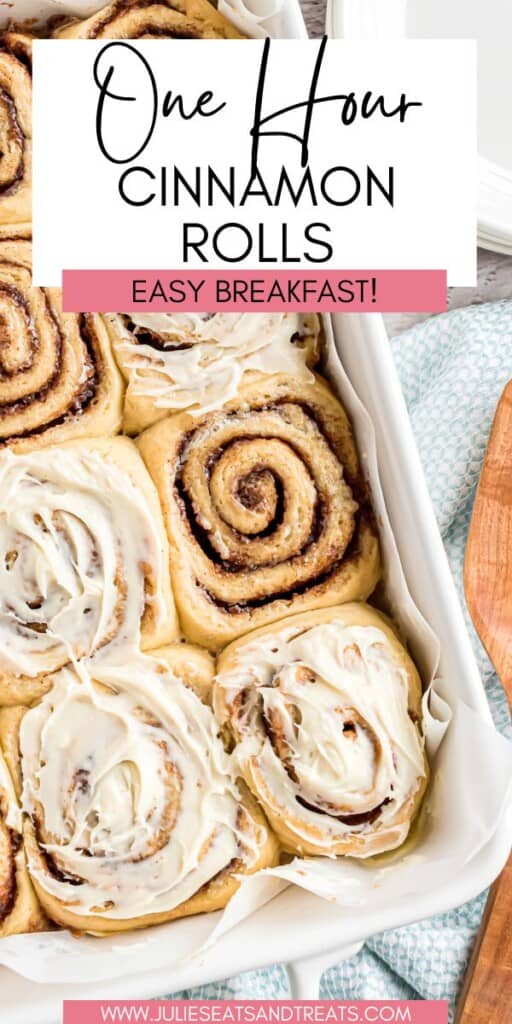 You’ll never believe that these soft, gooey easy Cinnamon Rolls are made in just one hour! They are perfect for the holidays, but great all year long as a sweet breakfast or brunch treats. Tender, light and flakey cinnamon rolls with a delicious cream cheese frosting on top.

Pair them with a breakfast casserole and coffee for an amazing breakfast no one will forget!

You Will Love These EASY Cinnamon Rolls

These soft cinnamon rolls are made from scratch and I promise they’re so easy!

How to Make Homemade Cinnamon Rolls

Prepare the yeast: Heat the milk in the microwave until it’s lukewarm (between 98 and 105°F). Whisk in the yeast and sugar and then let it proof for 10 minutes.

Make the cinnamon roll filling: Mix the softened butter, brown sugar, white sugar, cinnamon, and vanilla in a bowl. Set the mixture aside while you make the dough.

How to make the cinnamon roll dough:

Assemble the rolls: Roll the dough out on a floured work surface and spread the cinnamon filling over the top. Start at a short end and roll the dough up into itself like a jelly roll. Slice the roll into 12 equal-sized rolls.

Rising time: Place the rolls in the prepared pan and cover it with a dish towel. Let the rolls rise for 50 minutes at room temperature.

Bake! Drizzle the tops of the rolls with heavy cream and bake them at 350°F until they tops are lightly golden brown.

Make the Cinnamon Roll Frosting: While the rolls bake, make the frosting. Mix cream cheese, powdered sugar, vanilla, and salt in a bowl until creamy and smooth.

Frost the cinnamon rolls: Allow the rolls to cool for a few minutes and then spread the frosting over the top.

It depends on the recipe! You don’t have to do that with this easy cinnamon rolls recipe. After the dough has risen for 50 minutes, the rolls are ready to bake!

How should you reheat cinnamon rolls?

The easiest way is in the microwave. Just place the frosted cinnamon roll on a plate and warm it for about 30 seconds.

How to Store Cinnamon Rolls

Are you excited to give these easy cinnamon rolls a try this weekend? You will love every last bite of these soft rolls with that amazing cream cheese frosting!

END_OF_DOCUMENT_TOKEN_TO_BE_REPLACED

I'm here to help you win in the kitchen again! Life is Busy, Life is Crazy, but that doesn't mean you can't make your family dinner! Julie's goal is to provide you with easy, family, friendly recipes that use pantry staples. Dinnertime will be stress free again!
More Recipes
88 shares