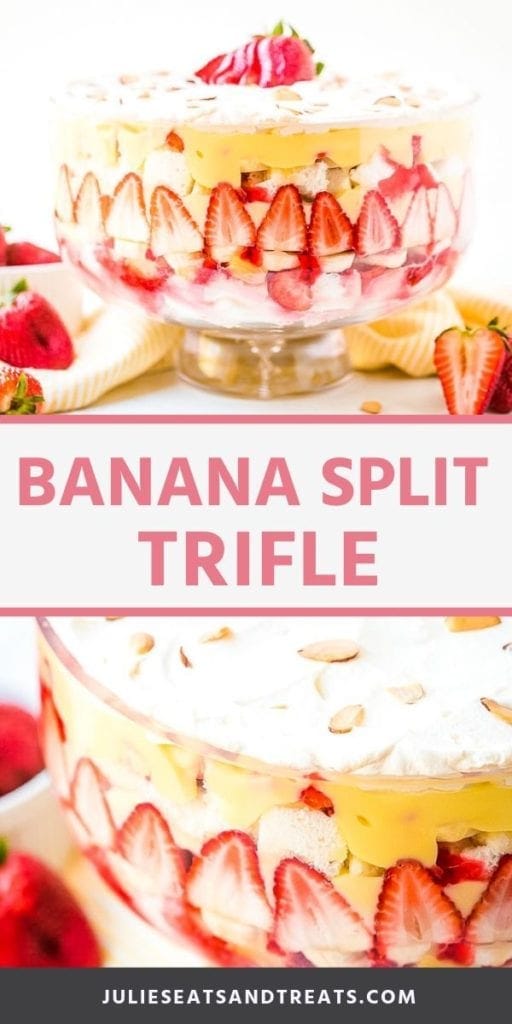 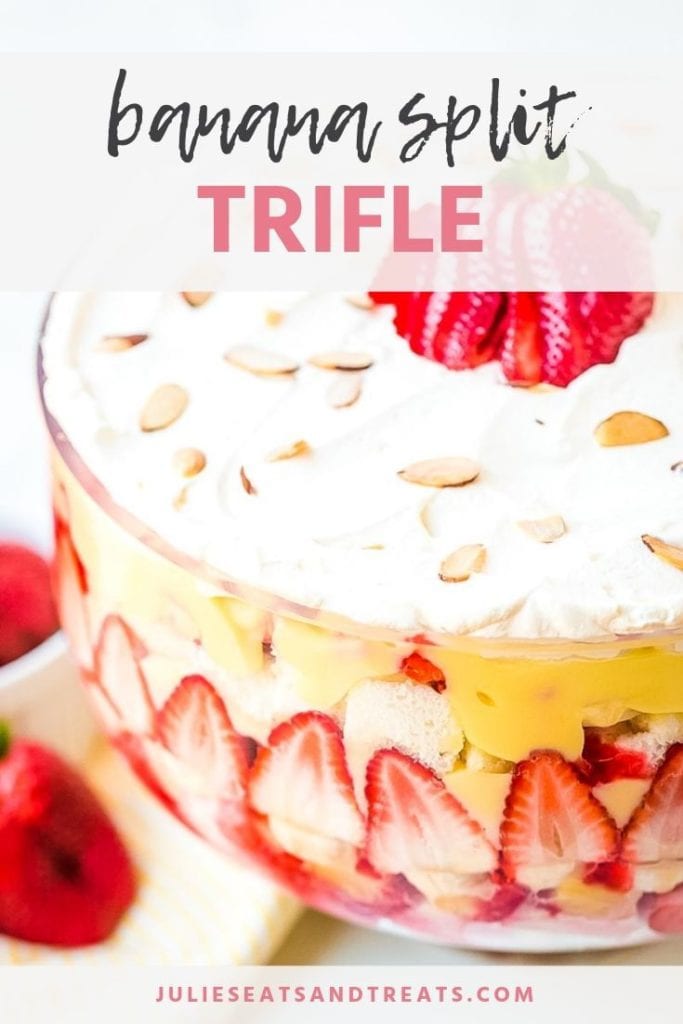 Banana Split Trifle is the perfect dessert for a crowd! This trifle recipe has layers of strawberries, Angel Food Cake, pineapple, bananas and vanilla pudding! This dessert is sure to be the highlight of your party. It’s a great dessert option when you entertain in the spring or summer!

Love this trifle recipe? Make sure to check out this Mason Jar Trifle, Reese’s Peanut Butter Trifle or this S’mores Trifle! They are all delicious and easy for crowds! 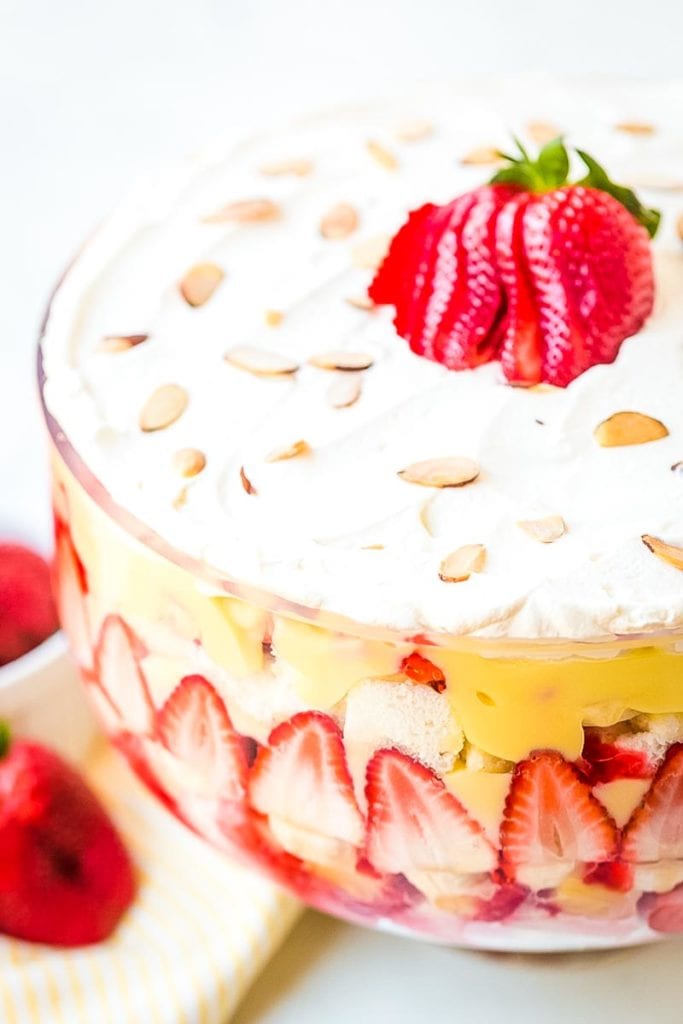 I don’t know about you, but I just don’t have time for fussy desserts during the summer! I love watching those crazy cake decorating videos on Facebook, but who has time for that in real life? I don’t, that’s for sure. During the summer I like to keep things nice and easy.

That’s why a fruit trifle is one of my go-to summer desserts. They look impressive, but they are so easy to make! Plus, one trifle can feed a lot of people so they’re great for parties, BBQs, and potlucks.

You can still make it impressive by getting a pretty trifle bowl to serve it up in!

What is a Trifle?

A trifle is a layered dessert that is served cold. There are many variations but it usually has layers of sponge cake, pudding or custard, and fruit. Sometimes, like with traditional English trifles, the sponge cake is soaked in alcohol like sherry, but for this strawberry trifle I wanted it to be kiddo-friendly, so I skipped the alcohol.

This strawberry trifle has layers of soft angel food cake, bananas, pineapple, vanilla pudding and, of course, fresh strawberries! I decorated the top with some cool whip (another shortcut!) and sliced almonds. Look how pretty it is! 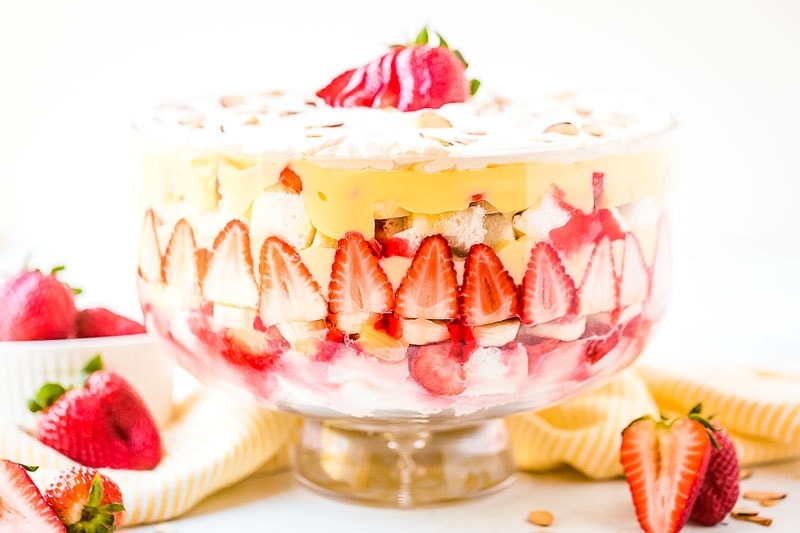 So, are you ready to make this easy banana split trifle? Trust me, once you try it you will want to make it all summer long!

What I love about trifles is that you don’t have to make the whole thing from scratch. I mean, I guess you could make your own angel food cake and pudding, but when the weather’s nice I don’t really love being stuck in the kitchen with a hot oven.

Not to mention that homemade angel food cake is a little high-maintenance. I prefer to go the low-maintenance route and use store-bought cake and pudding – it cuts the prep time way down and that makes me very happy.

Trifles are fun to make because you basically just layer all of the ingredients in a trifle bowl or other large bowl. You can get creative as you want with how you layer the fruit, but even if you just sort of toss it all together it still looks impressive!

How to Make a Banana Split Trifle

There are a few steps in making a trifle, but using shortcuts like store-bought cake and pudding mix makes it so much easier. Most of the time is hands-off while the trifle chills!

The first step is to make the gelatin. All you do is dissolve the gelatin in boiling water and, once it’s dissolved, add some cold water.

Cut the cake into cubes and place half of them in the trifle bowl. In a small bowl, combine the mashed strawberries with the sugar and then spread half of the mixture over the cake cubes.

Slice the bananas and toss them in the reserved pineapple juice and then layer half of them over the pineapple. Top the sliced bananas with half of the sliced strawberries.

Grab the refrigerated gelatin and pour it over the fruit in the trifle bowl. At this point, this first trifle layer needs to chill in the fridge for 20 minutes along with the separate bowl of gelatin that was left out at room temperature.

While the trifle is in the fridge, make the pudding by whisking the pudding mix with the milk for a couple of minutes or until it’s soft-set.

Once the trifle has chilled for 20 minutes, take it out and spoon half of the pudding over the sliced strawberries.

Repeat the cake, fruit, gelatin, and pudding layers and top the trifle with cool whip. Cover it with plastic wrap and keep it in the refrigerator until you’re ready to serve it. Just before serving, I like to decorate it with some slivered almonds on top.

I know you’re going to love this strawberry trifle! It’s always a hit when I serve it at our summer parties. 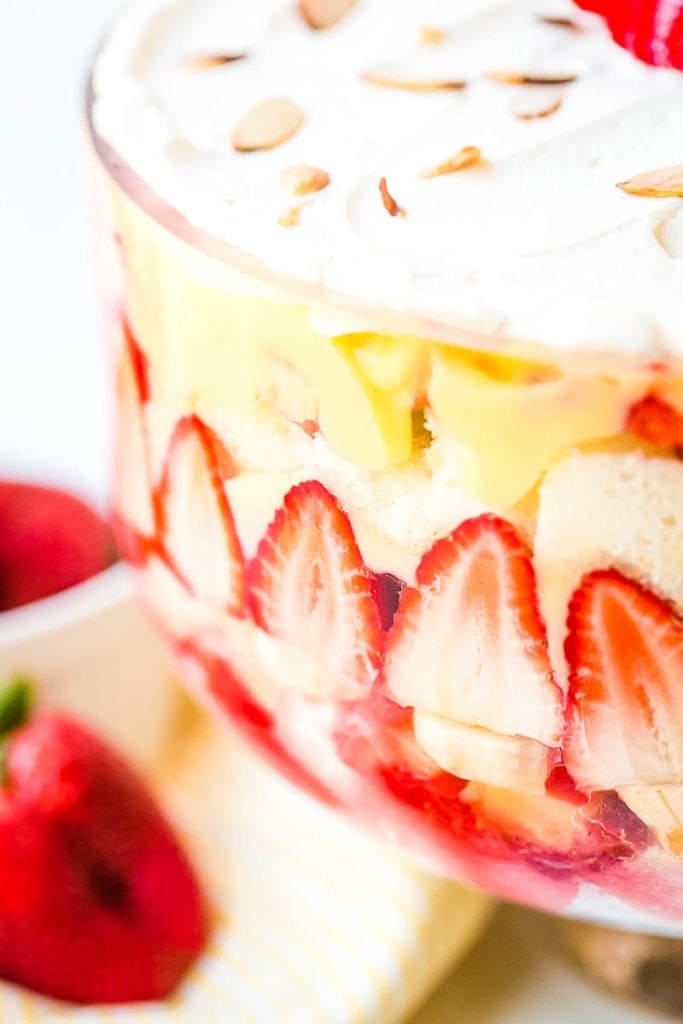 Before you make your trifle here are some quick tips and tricks to making it the best!

If you have additional questions please comment below and let us know!

Can I Make this Banana Split Trifle Ahead?

Yes, you can make a trifle ahead of time, which is just another reason to love this easy summer dessert! You can layer the cake, pudding, and fruit in the bowl and then just cover it tightly with plastic wrap. Although it will keep in the refrigerator for up to three days, I think that’s a little too long because the cake will get a little soggy.  So, I think it’s a good idea to make it up to one day in advance. That way the cake doesn’t absorb too much of the pudding.

What is the difference between a trifle and a Parfait?

Honestly, they are often interchangeable with people, but there is a bit of a difference if you want to get technical.

A trifle is a custard and/or cream layered with fruit. It also has cake in it and that is doused with alcohol. Sorry I skipped that! They are served at the end of the meal.

A parfait is typically made with either ice cream or frozen custard. Instead of a cake layer there is a granola layer. Sometimes people switch out the custard/ice cream for yogurt!

More Desserts to feed a crowd!

Love it? I knew you would! Rate it, please!! It would be awesome if you’d give it a five-star rating below!