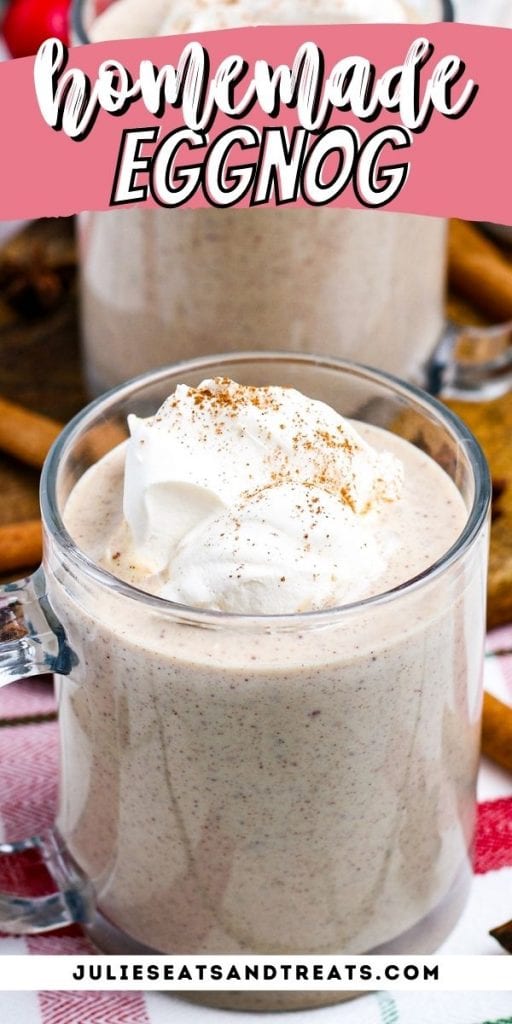 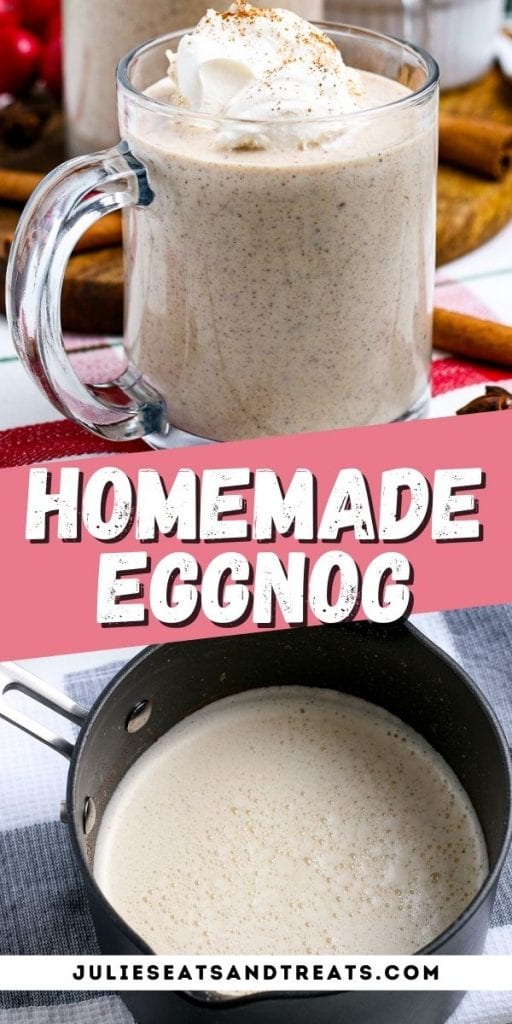 Thick, creamy homemade Eggnog is easy to make and such a treat! It has a mild flavor with a hint of nutmeg and cinnamon. It’s incredible and so easy to make I bet you’ll skip the store-bought version next time!

Is it really the holidays if you don’t have at least one glass of eggnog to celebrate? It’s not at our house, so we always make sure to have some on hand to sip on!

Sure, you can buy eggnog at the store, but it’s really easy to make at home! Make a batch for your holiday party, Christmas Eve celebration, or whenever you want a rich, sweet drink. You can serve it plain for the kiddos and make spiked eggnog for the adults. Everyone will love it!

It’s a thick, rich drink made with milk, cream, eggs, and warm spices like cinnamon and nutmeg. It’s served cold and often garnished with cinnamon sticks. You can make it without alcohol or spike it for a boozy treat!

So, turn on the Christmas music and make yourself a batch of this delicious holiday drink. Maybe make a batch of sugar cookies to go with it!

How to Make It

Simmer: In a small saucepan, combine the milk, cinnamon, nutmeg, and vanilla. Slowly bring the mixture to a low boil over low heat.

Whisk: Separate the egg yolks from the whites and drop them into a bowl. Add the sugar to the yolks and whisk for two to three minutes or until the mixture turns a pale yellow.

Cook: Cook the milk and yolk mixture over medium heat until it’s slightly thickened. It’s ready once it coats the back of a spoon. You don’t want it to boil, so maintain the heat so it’s hot but not bubbling.

Stir: Once it’s thickened, remove the pan from the heat and stir in the heavy cream. Once combined, chill the eggnog for several hours before serving.

Once the eggnog is nice and cold, it’s ready to serve! I love to dress it up with garnishes to make it special:

How to Make Spiked Eggnog

If you want to give your eggnog a boozy twist, you have a few options! Brandy, rum, and bourbon are traditionally used to make spiked eggnog.

How much you add is up to you! Just stir in how much you want – the alcohol will add flavor and cut the eggnog’s sweetness for a delicious drink.

Does eggnog have raw eggs?

Raw egg yolks are added to the hot milk which cooks them so, no, there aren’t any raw ones in this eggnog recipe! The eggs are tempered which is just a fancy way of saying “cooked gently” so they don’t scramble. So, when you add the hot milk and cream to yolks you are cooking them – just slowly!

How long should you chill it before serving?

It needs to chill for several hours. If you are making it for a holiday party, I recommend making it the day ahead so it’s nice and cold when you serve it.

How long does it keep?

Homemade eggnog will last up to three days in the refrigerator. Be sure to store it in an airtight container.

Skip buying the carton this year and try this homemade eggnog instead! I can promise you’ll be able to tell the difference – it’s so much better when you make it yourself. It’s so rich and creamy and the perfect way to treat yourself for the holidays.

Homemade eggnog will last up to three days in the refrigerator. Be sure to store it in an airtight container.

END_OF_DOCUMENT_TOKEN_TO_BE_REPLACED

I'm here to help you win in the kitchen again! Life is Busy, Life is Crazy, but that doesn't mean you can't make your family dinner! Julie's goal is to provide you with easy, family, friendly recipes that use pantry staples. Dinnertime will be stress free again!
More Recipes
2424 shares