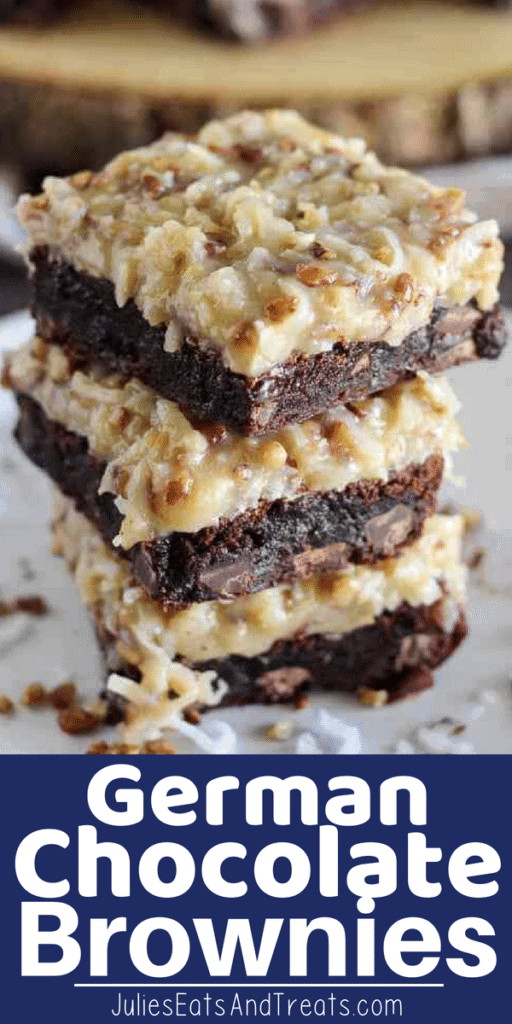 These rich chocolaty German Chocolate Brownies are topped with a gooey homemade coconut pecan frosting. Make the brownies from scratch, or use a boxed brownie mix as the base of this recipe. You’ll love this decadent dessert! 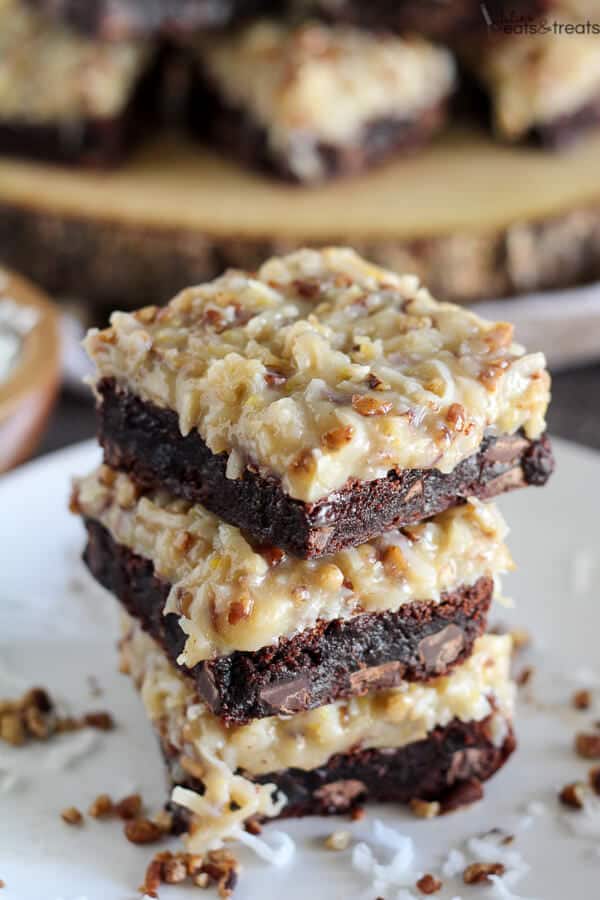 That big stack of brownies is calling your name, isn’t it? Especially if they are these rich chocolaty German Chocolate Brownies that are topped with a gooey homemade coconut pecan frosting. You can either make the brownies from scratch, or use a boxed brownie mix as the base of this recipe. You’ll love this decadent dessert!! Life is better with brownies, friends. It’s a fact.

The thing I LOVE about brownies (aside from their fudgy, gooey, chewy-edged deliciousness) is that no special occasion is needed to whip up a batch. Layer cakes are made for birthdays, fancy pies mark the end of a dinner party, and homemade pastries are for weekend brunch. 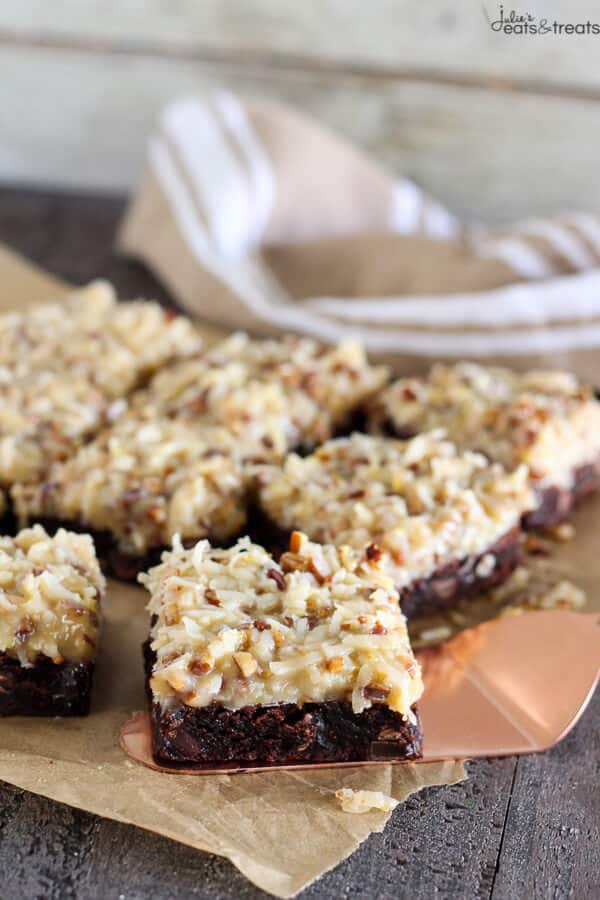 But, brownies can be made for any reason…

You thought it was Friday and just realized that it’s actually Thursday (ugh) → brownies. 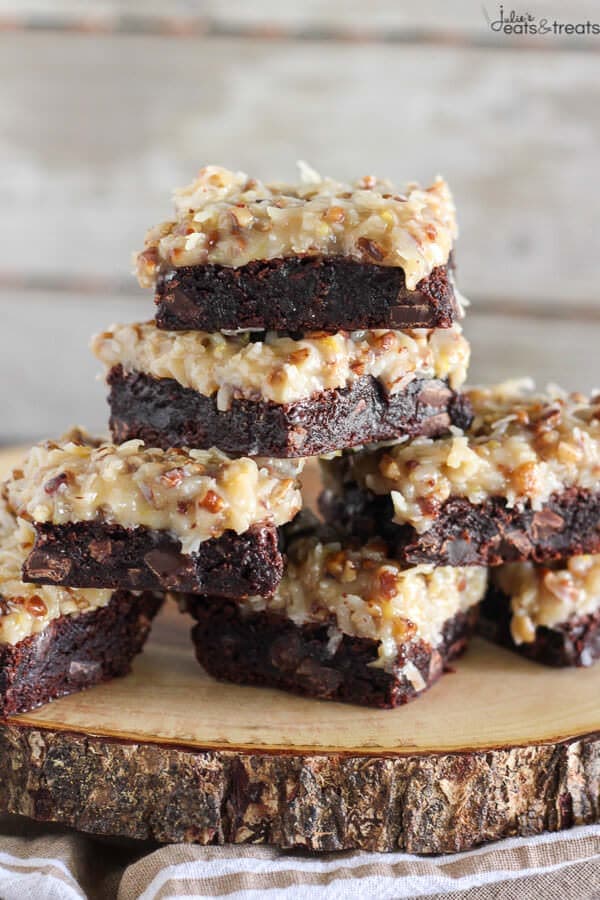 There are so many ways you can flavor brownies. In the past I’ve added raspberries and white chocolate, peanut butter, creamy coconut, caramel, and espresso. Today I’m bringing you German Chocolate Brownies! These brownies are topped with a gooey, sticky, coconut pecan frosting. Don’t forget you want to toast those pecans! Feel free to use your favorite brownies for the base of this recipe. Here is my favorite homemade recipe, but you can absolutely use a boxed mix too.

My family loved these brownies. The frosting takes them over the top and adds fantastic texture and flavor. Note: Please, please, pretty please, stick a spoon in that frosting and take a big bite before pouring it over the brownies. Taste testing is half the fun of being in the kitchen, right?! You’re welcome. 😉 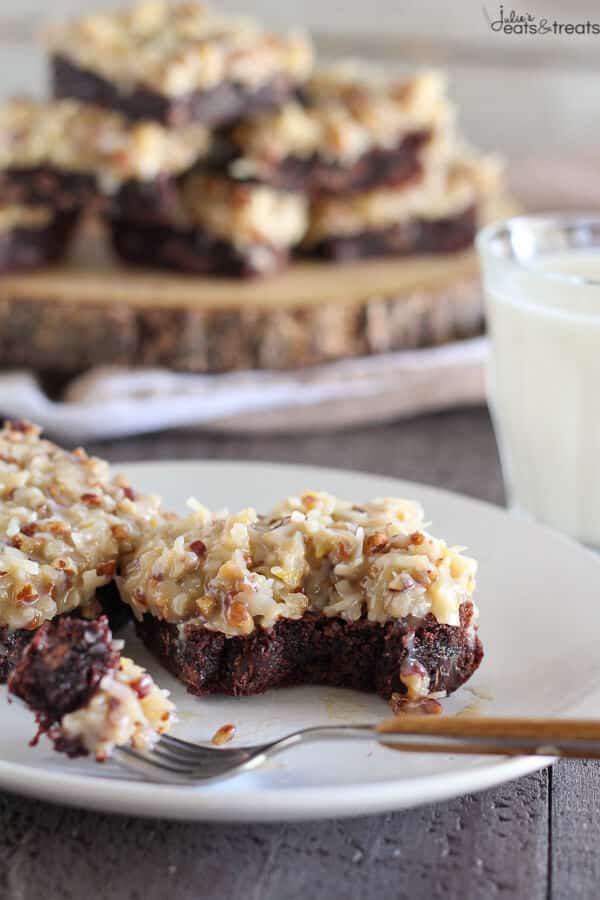 After slicing the brownies, most of the frosting will hold up without dripping down the sides, but you might get a few spots of drippy, sweet deliciousness. You can choose to eat these brownies by hand or with a fork. My husband and son have an irrational fear of being sticky (true story), so there is no way they’d eat these with their hands. My daughter and I dove right in without utensils. In fact, my camera is currently covered in stickiness from moving these brownies around while photographing them. Sshhhhh, don’t tell my hubby.

Now hurry and get in your kitchen! Bake some brownies, drown them in coconut pecan frosting, and then dive in. Enjoy, friends!

How to toast pecans

Place in a dry skillet over medium heat, stirring frequently, until fragrant and toasted. Watch them closely so that they don’t burn.

How to Make German Chocolate Brownies

First you will need to prepare your brownies boxed or homemade.

Then grab a medium saucepan and combine the evaporated milk, sugar, egg yolk and butter over medium heat. Bring this mixture to a simmer and cook for 8-10 minutes. Make sure to whisk this frequently.

Remove the pan from the heat and stir in vanilla extract, pecans and coconut. Spoon onto the brownies and carefully spread the frosting in an even layer.

Cool completely or until the frosting has firmed up a bit before cutting. You can speed this along by placing the brownies in the refrigerator or freezer for a short time.

They will dry out if you leave them in there to long! Just a heads up!

To toast pecans: Place in a dry skillet over medium heat, stirring frequently, until fragrant and toasted. Watch them closely so that they don't burn.