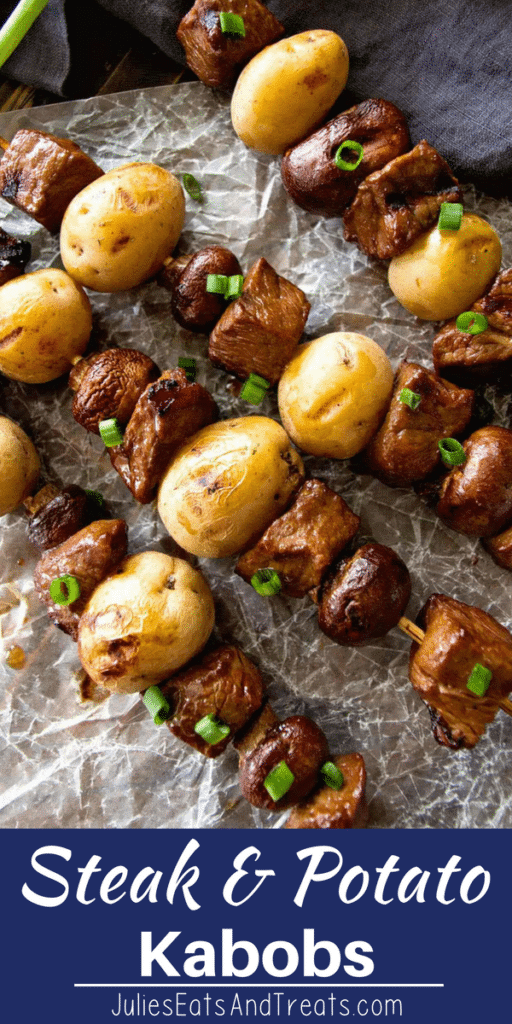 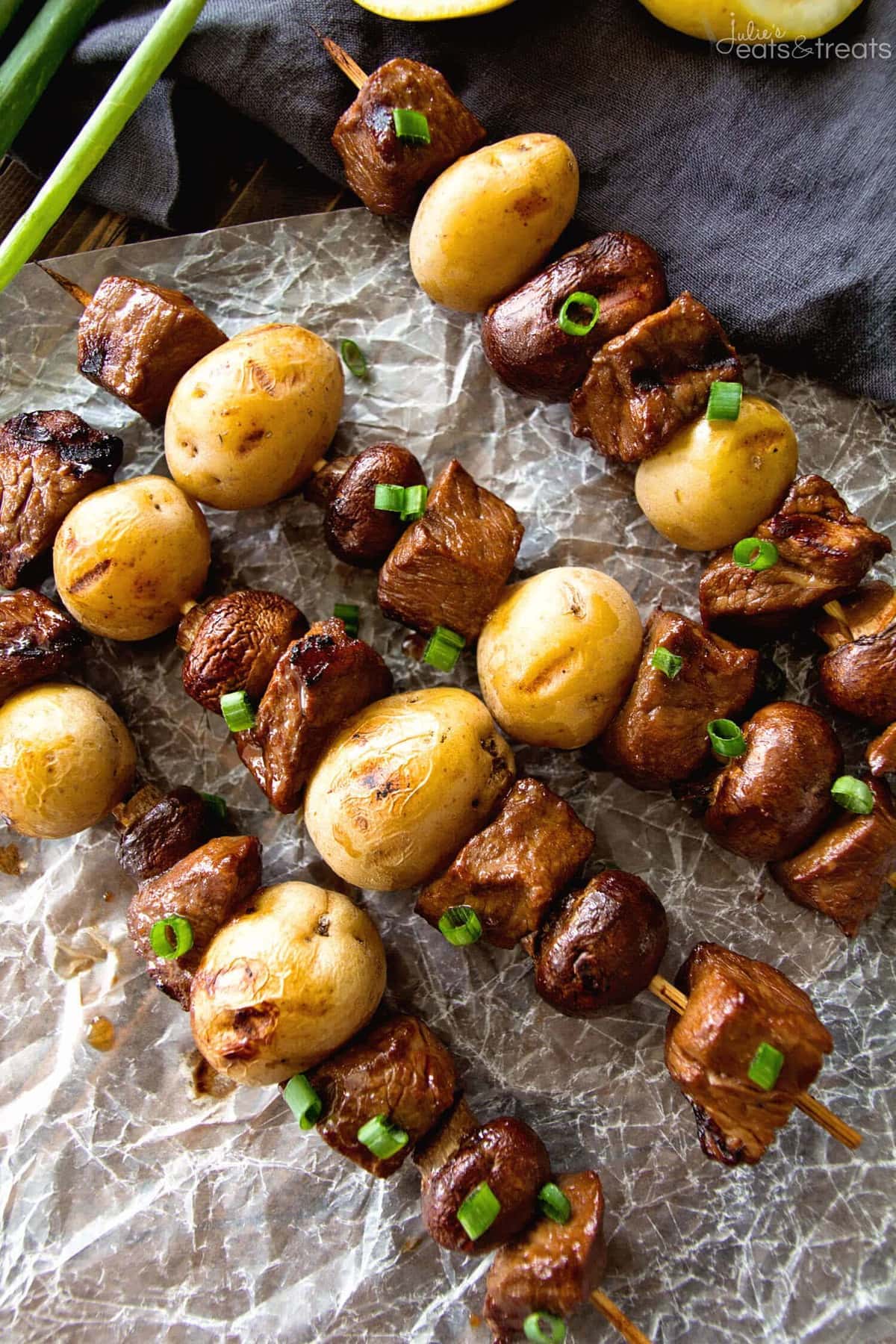 Whoa where has the time went? Actually I’m thankful that it’s flying by this time because it means SUMMER is here! SWEET! HOORAY! You know what summer means to me? Obviously the answer is going to focus on food because that’s how I roll. Duh! It means it’s grilling season! Yes, I know some of you are blessed to be grilling all year long, but not here in the great state of Minnesota. Not unless I want to gear up in my parka and mittens. Trust me. Mittens while grilling can be a tad bit tricky. Not that I’ve done that or anything….

That’s why I’m bringing you some awesome kebabs today! You guys have went crazy over these Asian Steak Kebabs and Balsamic Steak Skewers so I thought it was time I gave you another delicious option and I came up with Steak & Potato Kebabs because sometimes you need some meat and potatoes in your life! 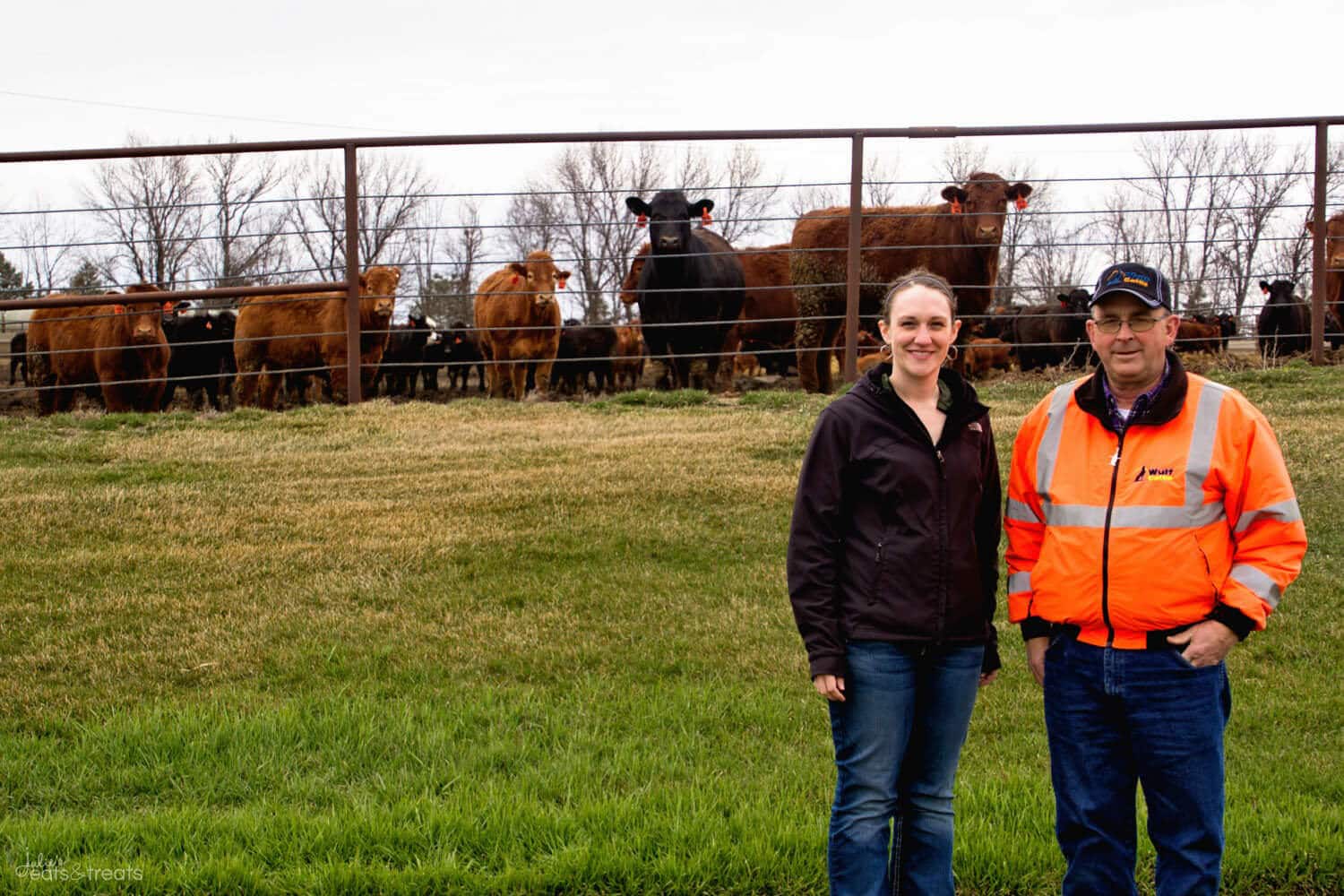 Today we are going to break out of the office and go on a little field trip! See that guy up there? He’s my best friend’s Dad! I got to hang out with him the other day. As you all know I live in small town Minnesota and I know everyone. Well, pretty much everyone. Jerry {Guy Pictured Above} lived down the road from me and I grew up in 4-H with his girls.

Our field trip is going to be to Wulf Cattle today! Wulf Cattle was founded over 60 years ago by the late Leonard Wulf and now has presence in Minnesota, South Dakota and Nebraska. Leonard was a pillar of our small community. They specialize in raising breeding stock all the way to harvest. Their breeding stock is used in a variety of ways. They either keep them and raise more cattle at Wulf Cattle or they supply stock to other ranches. 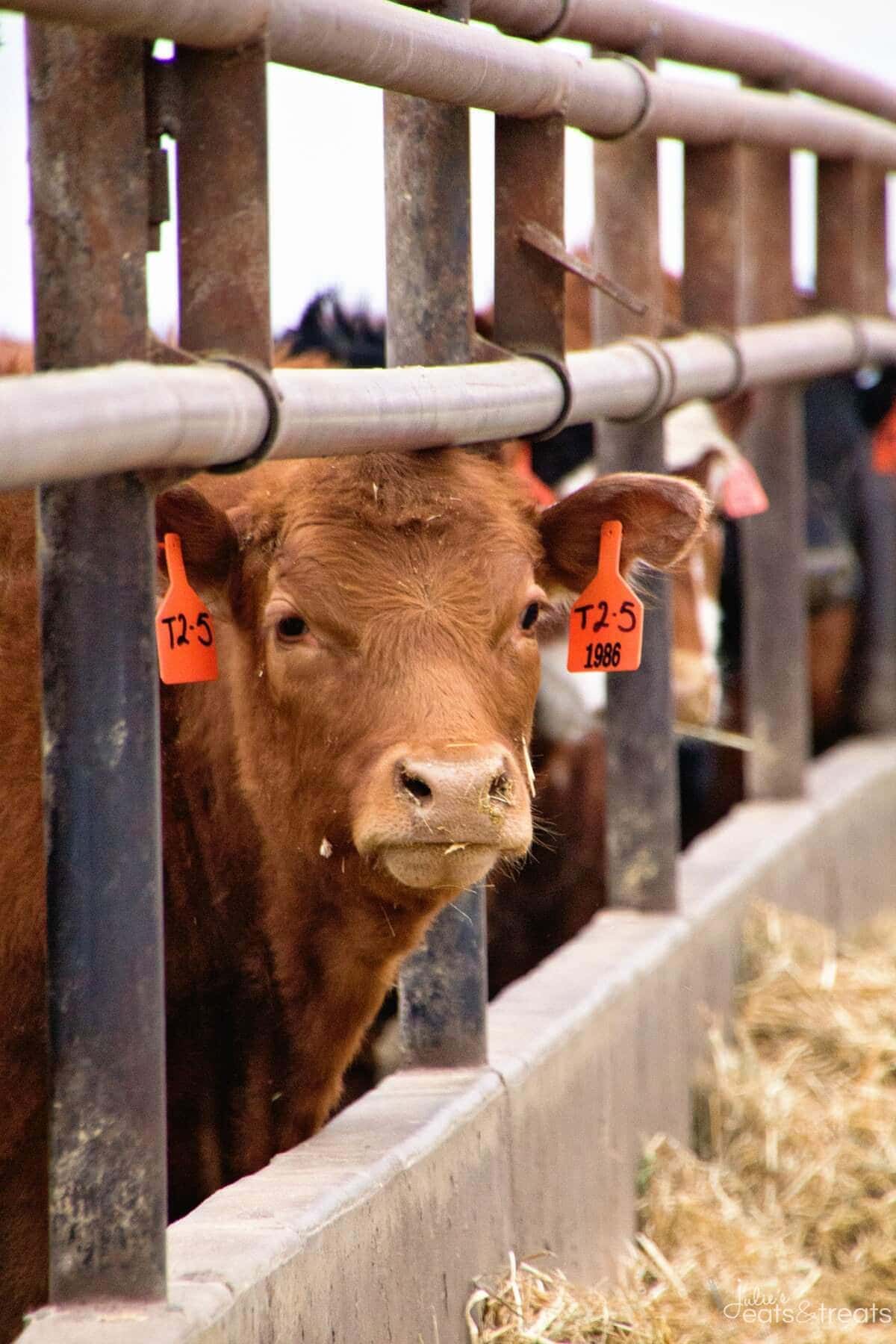 Back to my 4-H days. Want to hear a story? I showed sheep in 4-H and they are pretty little so I didn’t have to worry about them throwing me around or anything. I had it easy. The bestie I mentioned showed beef cattle and those guys are big! Henceforth why I stuck to sheep. Anyways, she grew up on a beef farm so she showed those big guys. I would “assist” in tie outs at the fair and all that fun stuff but that was as close as I wanted to get.

Until one day at the fair…… I ended up in the round robin showmanship challenge. This means I showed all the animals and I was judged on them. Insert Julie hyperventilating a little. Everything was going just peachy as I showed hogs, sheep, rabbits and then it was time for the cattle. Gulp. I decided I was going to own this. I knew what I was doing. I had it under control…..

I think someone was out to get me that day because as everyone else led their cattle calmly around the arena and they stood perfectly still mine was feisty. It would dance instead of walk, it would throw its head when it was supposed to stand still. Needless to say I was getting a workout. Of course, to make things worse, the guy I had a huge crush on was watching, laughing and getting entertainment out of this entire fiasco. You see, he was big into showing cattle, so he thought this was great! Luckily for me as I exited the arena he came to my rescue and grabbed the halter from me. That was the first and last time I tried my hand at that. Good thing I held tight and didn’t end up with a loose animal running about the arena like once when I was showing a sheep. My friends that is a whole other story! 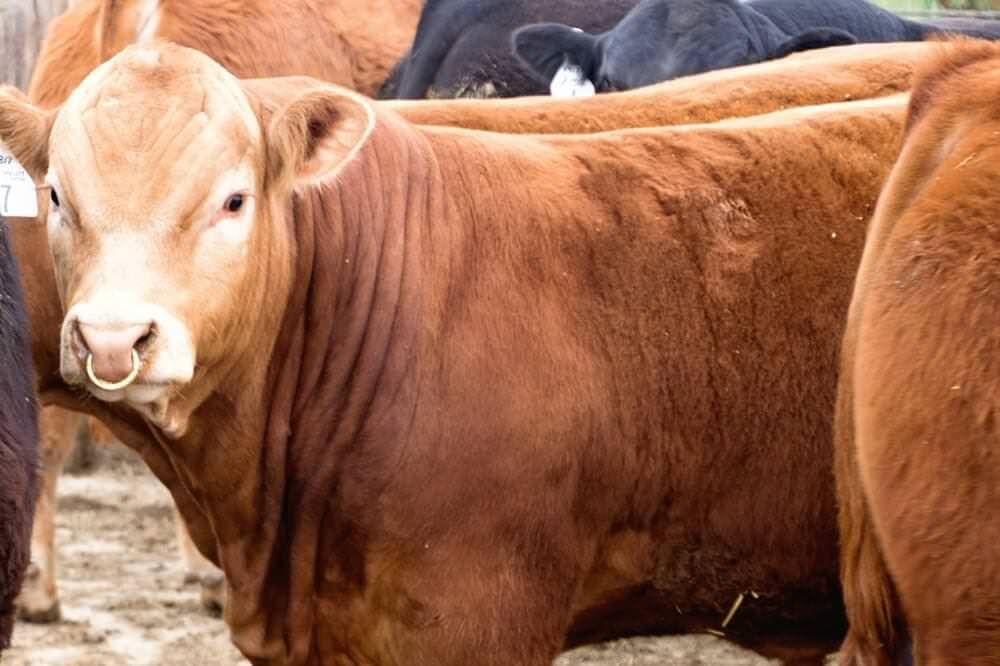 Like I said the other day I was hanging out with Jerry over at Wulf Cattle hoping he wasn’t going to throw a halter my way because we all know how I feel about that! Rest assured he did not. I may have ran the other direction. They were preparing for their huge annual sale which is quite the event, attracting fellow cattlemen from all over the world. I remember this was pretty much a national holiday when I was growing up. Everyone went to the “sale” to check it out. 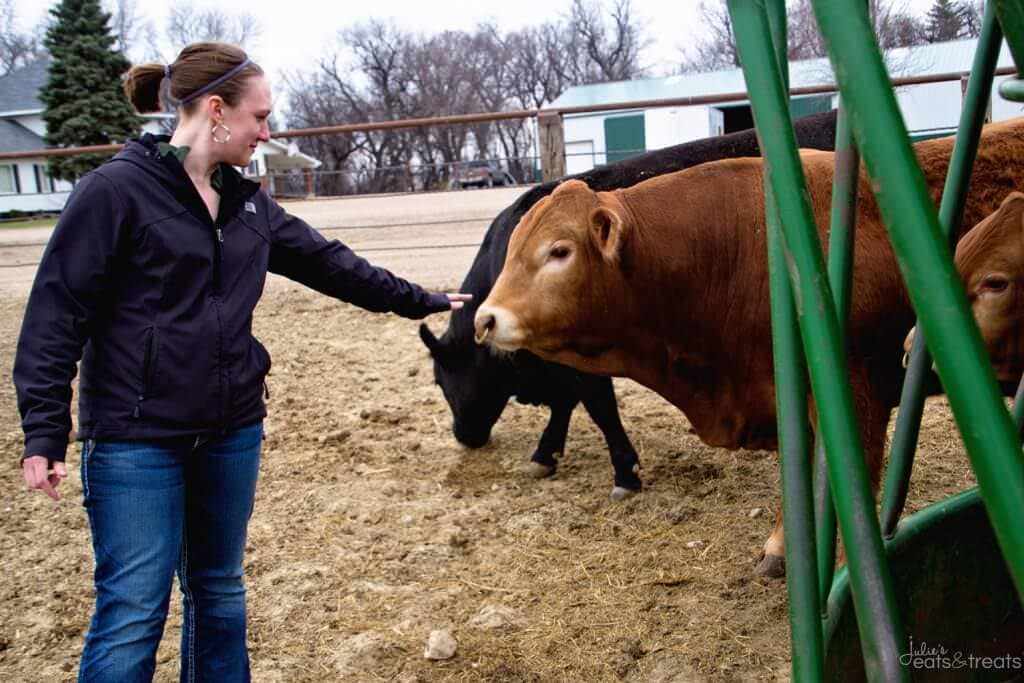 During my field trip I ended up getting shoved in a pen of bulls. I may have died a little. Then sucked it up and walked in. Own it Julie. Own it. This being chanted in my head as I shook in my pants. I survived and met a few friends as you can see above! I found it super cool that they have used selective breeding to make their cattle docile since the farm was founded by Leonard. This is also reassuring when you are in a pen with a bunch of bulls I might say!

As we were chatting, roaming around with bulls I learned a lot about Wulf Cattle. One thing I found as Jerry spoke about how the farm is ran, is that it always came back to the fact they want to deliver a healthy, humanely produced, safe and nutritious protein end product to their consumers. Hey, Hey, Hey that’s YOU! They always have you in mind! Well, sorry guys first they have their cattle in mind and that’s reflected in how they treat the cattle. Then it’s YOU!

Let’s start at the beginning! The cattle aren’t always in a feedlot. For the first 10-15 months of their lives they are raised on grass pasture and feed. After that they are moved to feedlots in large pens until they are 18-22 months. In the feedlots they are fed nutritionally balanced diets that are formulated by professional nutritionists. Man, I’m kind of jealous! I could use a professional nutritionist most days! Anyone with me there?

The cattle are fed hay and corn diets which gives them a proper blend of energy, protein and fiber as well as vitamins and minerals in their diets. The result of this diet is that YOU, the consumer, is provided with high quality beef at your local grocery store! See they are looking out for you just like I said! Not only are Limousin cattle docile but they provide a lean, healthy and delicious cut of beef for you. In the feedlots at Wulf Cattle they raise a crossbreed of Limousin/Angus and Limousin/Jersey and this is what you guys purchase at your grocery stores!

What’s the best steak for Kabobs?

Tenderloin or filet mignon are the best cuts for making kabobs but they are also the most expensive cuts of beef. If you are looking for a more inexpensive cut that will still give you tender kabobs another option would be sirloin.

The top sirloin will be a more affordable cut of beef but still give you a tender kabob!

Do I need to marinate my Kabobs?

Make sure you marinate the kabobs like it calls for in the recipe to give them a ton of flavor!This brings not only flavor to the meat but also adds enough moisture to help keep it alive over the heat.

Disclosure: Wulf Cattle has compensated me for my time to create this recipe. Thank you for supporting the brands that make Julie’s Eats & Treats possible. All thoughts are my own.

END_OF_DOCUMENT_TOKEN_TO_BE_REPLACED

I'm here to help you win in the kitchen again! Life is Busy, Life is Crazy, but that doesn't mean you can't make your family dinner! Julie's goal is to provide you with easy, family, friendly recipes that use pantry staples. Dinnertime will be stress free again!
More Recipes
9496 shares