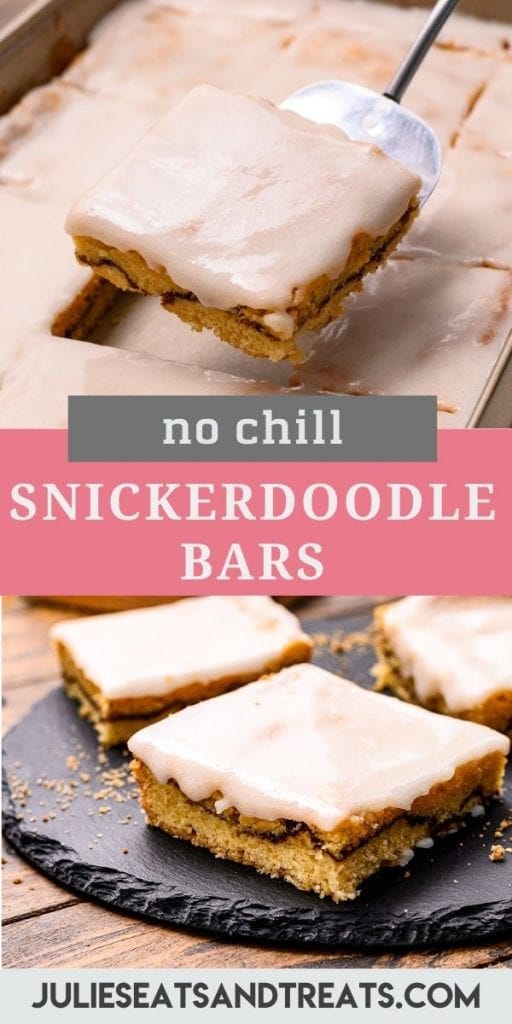 Imagine biting into a gooey, chewy cinnamon spiced blondie with a sweet icing! Make these Snickerdoodle Bars and you will be biting into just that! They are super easy to make, delicious and always a hit. Perfect for a sweet treat, bake sale, potluck and more. All the flavor of your favorite Snickerdoodle Cookie with less work, no rolling or chilling involved! 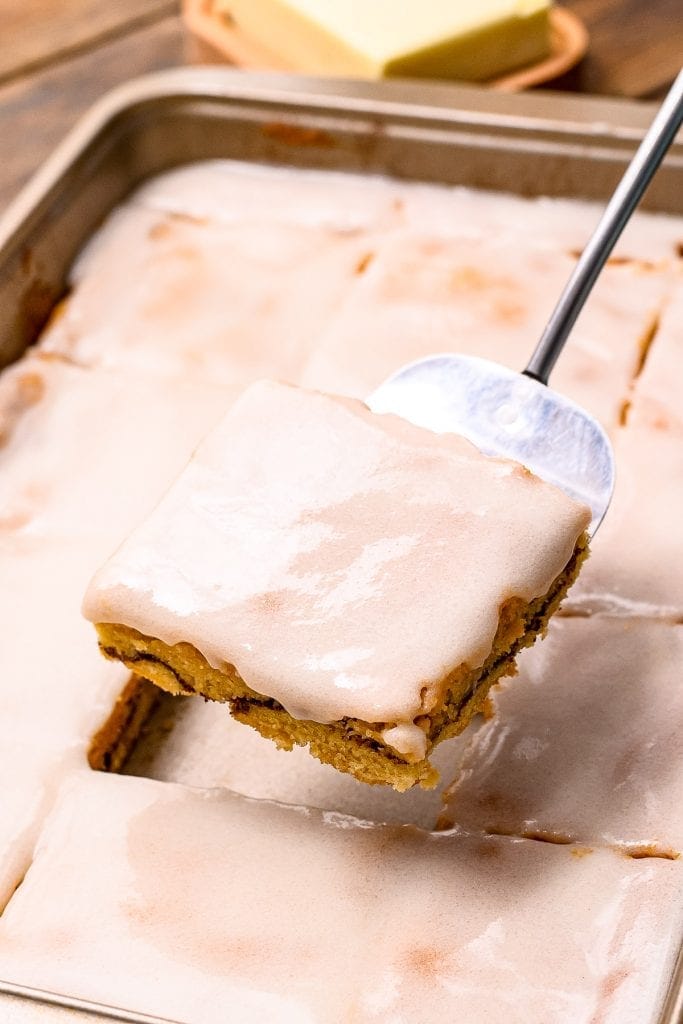 These Snickerdoodle Bars are fast and easy to make and I love them because they’re not your usual dessert bar – think blondie bar meets snickerdoodle cookies meets cinnamon rolls. Three amazing things that combine to make a bar that no one can resist. At least, I haven’t had anyone turn one down – everyone I know who’s tried them loves them!

I love all of the textures in these – you get a soft and chewy cookie bar with a cinnamon-sugar layer and the glaze soaks into the bars making them a little gooey. So good.

There are a few parts to the recipe, but don’t let that scare you off – I promise, they’re a breeze to make. Like my almond bars, they’re a little unexpected – it’s fun to switch things up and I think you’ll love them! 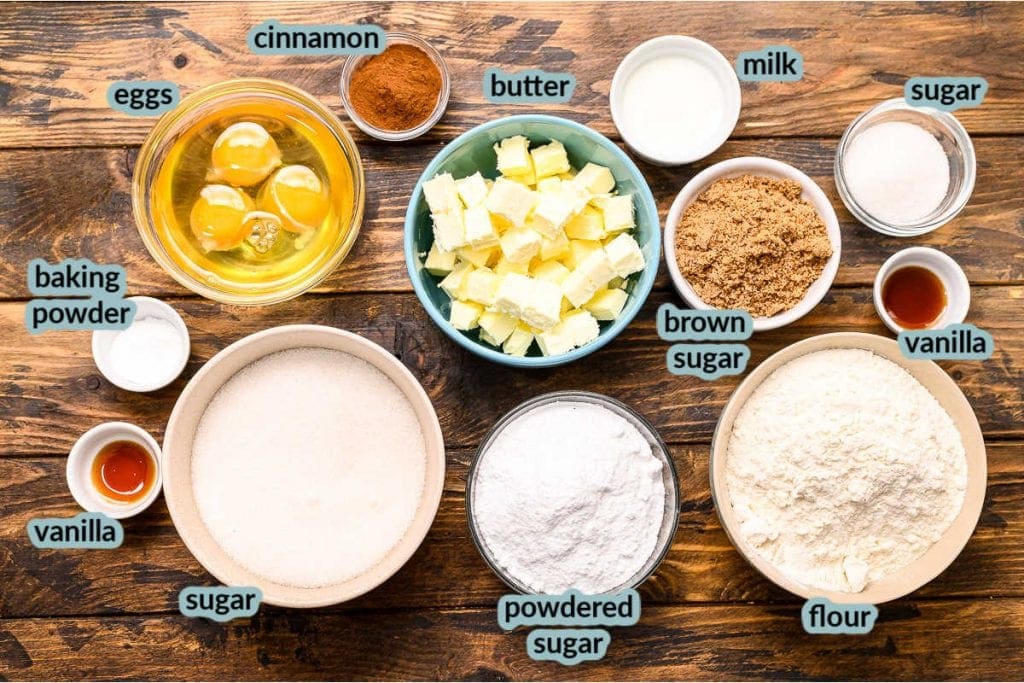 Be sure you plan ahead when you make them – they need to be completely cooled before you glaze them! The actual hands-on time is only about 20 minutes and the rest of the time is just patiently waiting for them to bake and cool. Or not patiently, which might be me all the time when I make them.

How to Make Snickerdoodle Bars 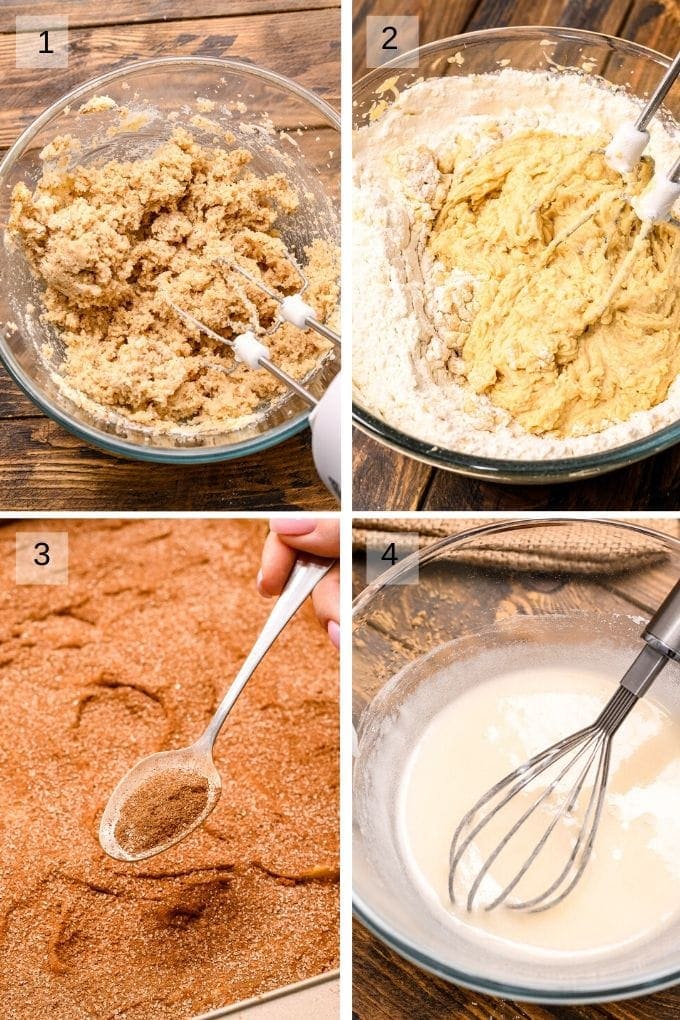 Next, create the cinnamon-sugar layer!

For the last step, bake them and make the glaze!

How far in advance can I make them?

You can make the bars up to a day in advance. Just fully cool them and then cover the pan with plastic wrap. I like to wait to glaze them until an hour or so before I serve them so they have the perfect gooey texture.

You can also make the bars ahead and freeze them for up to three months. Then just thaw them and glaze when you’re ready to serve them!

How should I store the leftovers?

Just keep them in an airtight container and they’ll keep for several days at room temperature.

Soft and chewy cinnamon-spiced bars – I’m telling you, these will be a hit when you make them! Be sure to print off copies of the recipe because everyone will want it! 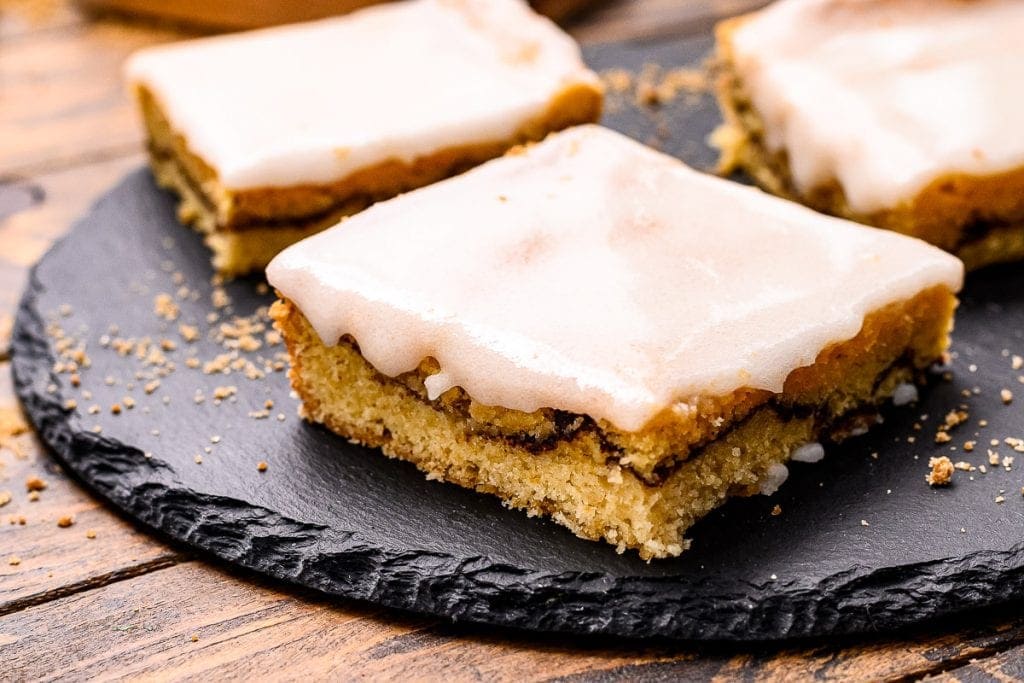 If you like this tasty treat, be sure to try these recipes, too! for

Try it and love it? Rate it, please!!!? Seriously though a five-star rating below will make my day! If you snap a photo, please be sure tag me on Instagram at @julieseatsandtreats or #julieseatsandtreats so I can see your yummy treat!!

END_OF_DOCUMENT_TOKEN_TO_BE_REPLACED

I'm here to help you win in the kitchen again! Life is Busy, Life is Crazy, but that doesn't mean you can't make your family dinner! Julie's goal is to provide you with easy, family, friendly recipes that use pantry staples. Dinnertime will be stress free again!
More Recipes
1039 shares