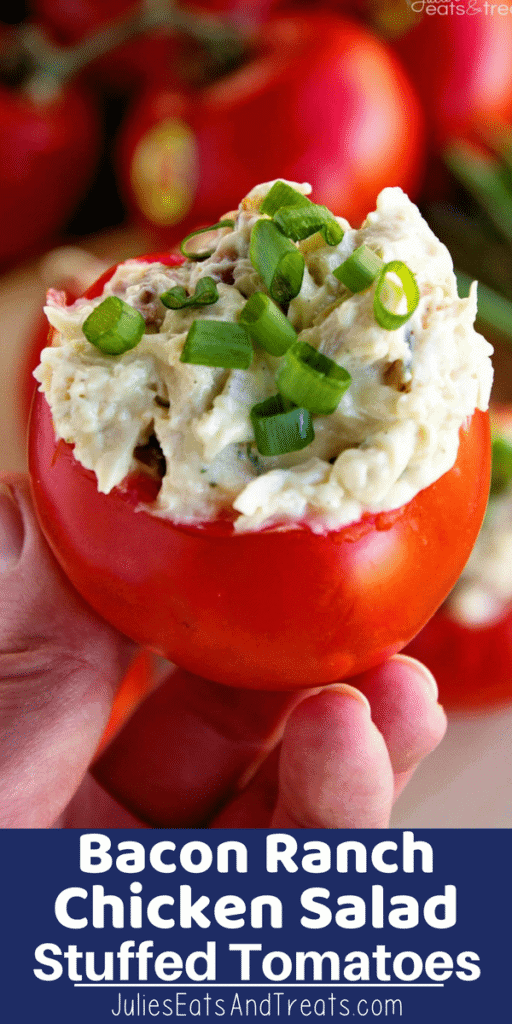 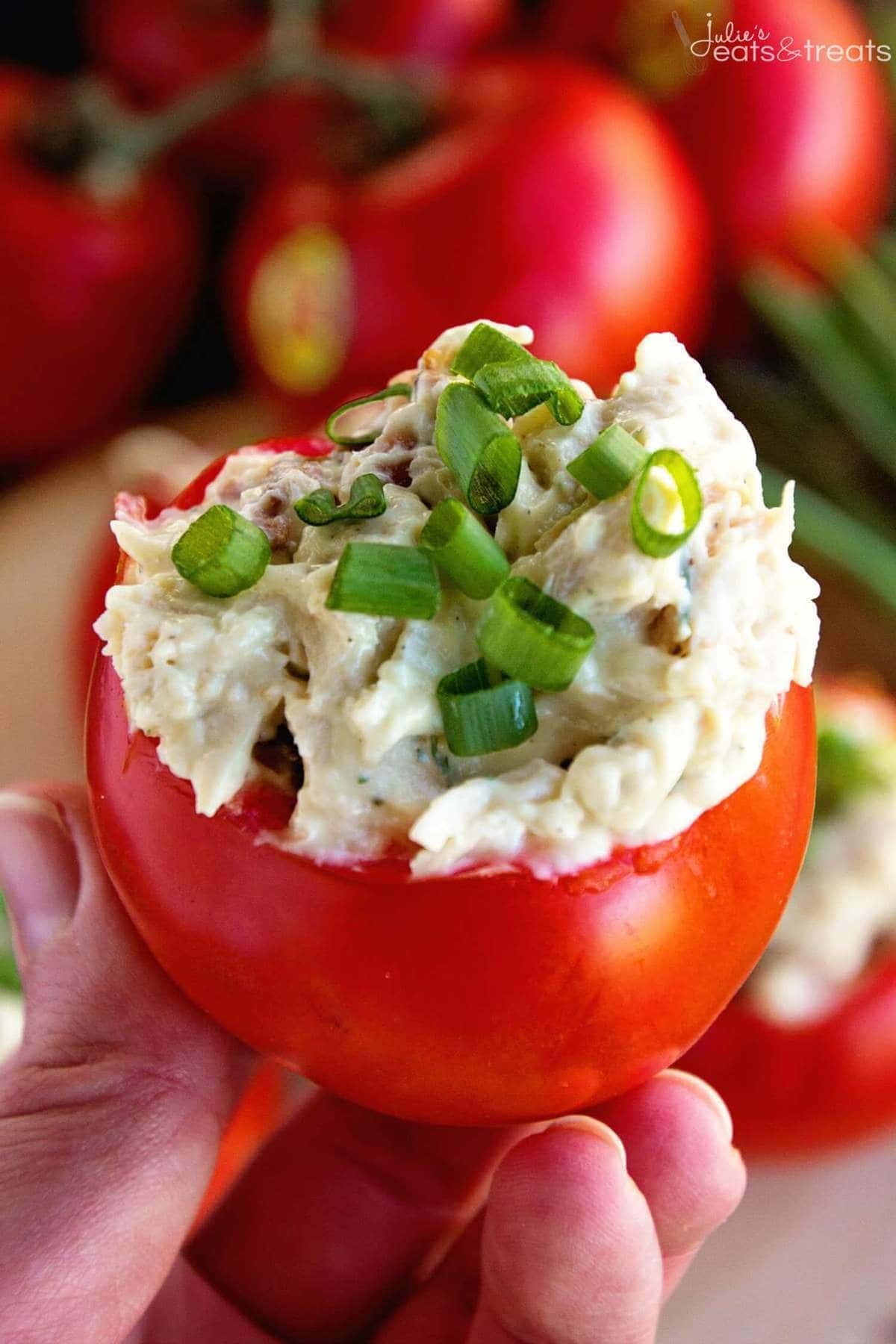 Summer. Who’s feeling like FINALLY it’s right around the corner? I’m pumped for all things summer. Totally pumped. Part of that is the food, or if we are being real, a LOT of it is about the food! Delicious, creamy potato salads at cook outs, grilled kebabs sizzling on your grill, ice cream chilling in the freezer waiting for you to devour. You name it. I’ll eat it! Especially when it comes to these delicious Bacon Ranch Chicken Salad Stuffed Tomatoes! Plump juicy tomatoes stuffed with a creamy chicken salad full of bacon and ranch seasoning! So flavorful and delicious.

Miss K is BEGGING for a bon fire. As in that’s about all she’ll talk about lately. We keep pushing it off and promising her. Of course the neighbors had one the other night and she caught a glimpse of it and it resulted in more begging and tears.

I kind of feel the same way, but the only reason is it’s about high time I have a s’more! How can you not love a crispy, ooey, gooey marshmallow topped with chocolate and smushed between graham crackers? Gimme them all. All. 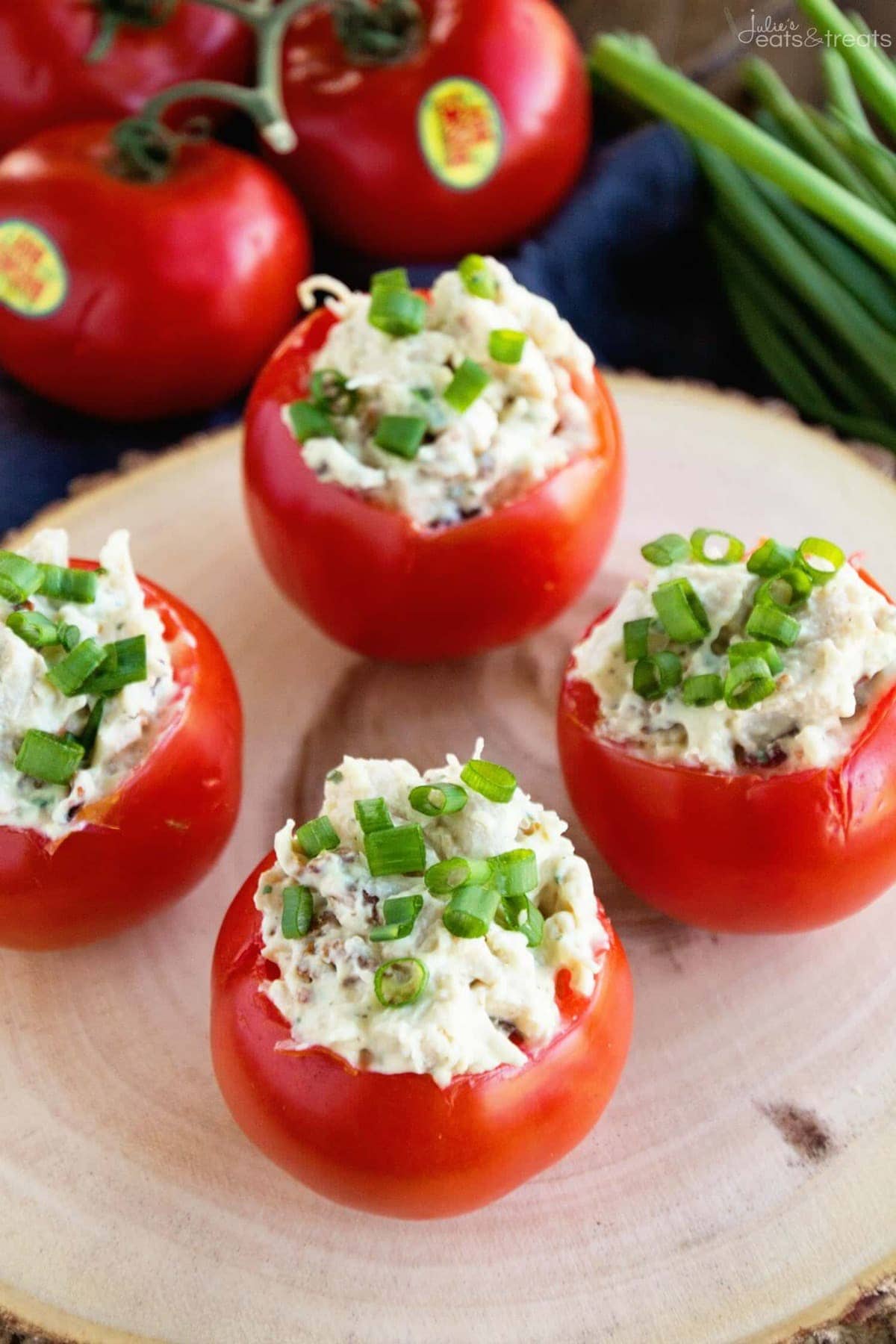 There’s some foods that are prime for summer and I get so excited about them nearing. Fresh goodies out of the garden are one of the things that I love. It’s such a shame I live in Minnesota and can only enjoy fresh produce and fruit out of our garden for a very limited amount time. I savor every bite of them!

One of my favorites are plump, juicy tomatoes. When I was growing up my Uncle Reuben had this MASSIVE garden. I mean MASSIVE people. As in it could feed my Dad’s entire family. That’s like fifty people. It’s ridiculous. It’s his pride and joy. He’s 90 years old and still gardening with passion!

I remember getting pails of tomatoes from his garden of fresh tomatoes and digging into them. Give me a sliced tomato with a little salt and I’m a goner. Swoon.

Too bad those dreamy tomatoes only last a few weeks in Minnesota. Tear. 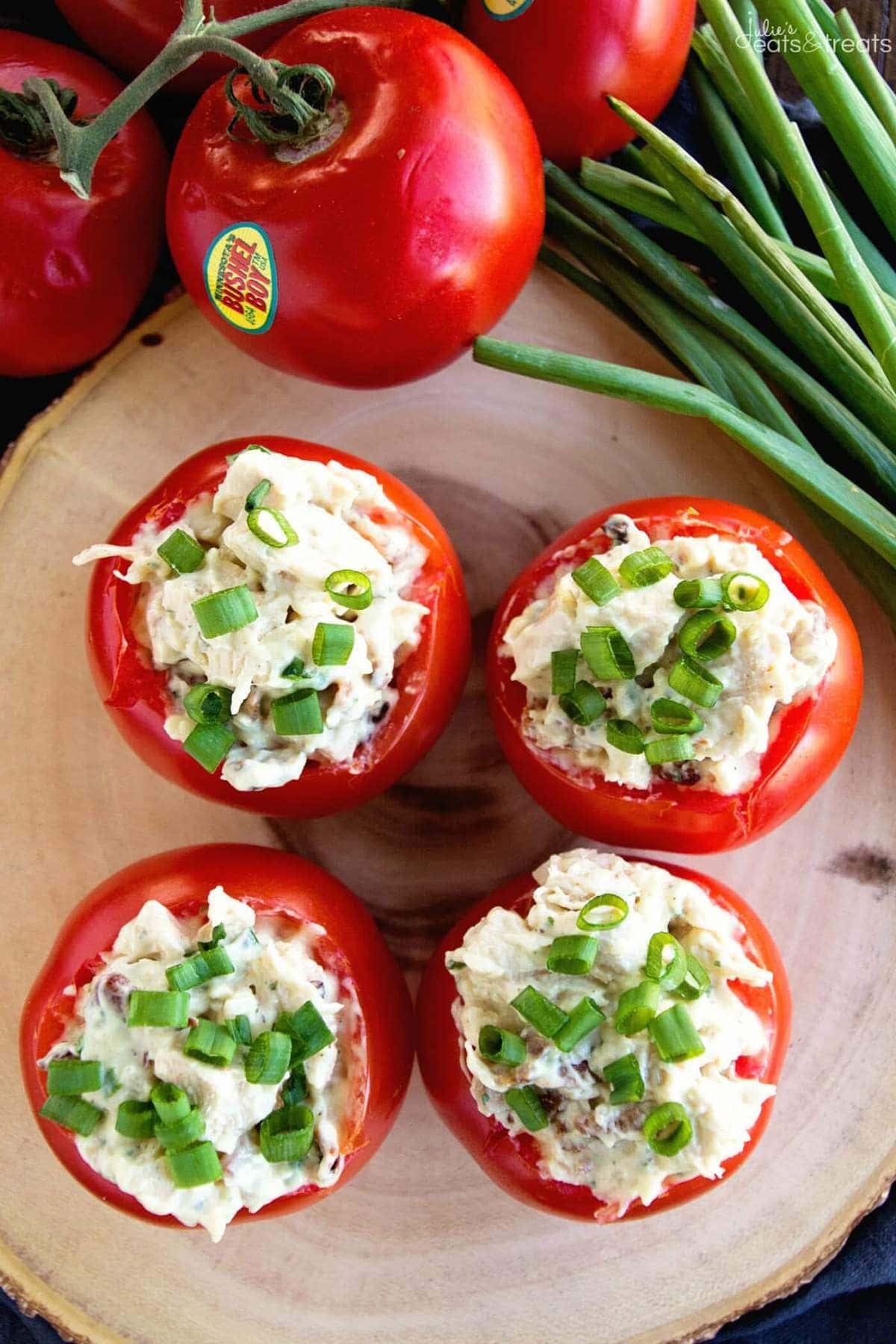 Speaking of Minnesota, I always get so excited when I find cool companies that reside in Minnesota. There’s the obvious companies like Target and General Mills which is pretty awesome! Who would have thought such amazing companies reside right here?

Then there are gems like Bushel Boy Tomatoes™, which I just found out about! The real reason I’m excited is because now I can get my juicy, delicious tomatoes all the time from a company right here in Minnesota! No waiting until summer for me when I can just seek out that yellow sunburst with the Bushel Boy Tomatoes logo and get them year round!

You know what is cool about these tomatoes? They are grown in a greenhouse year-around and pollinated with bumblebees! Plus they are grown with limited pesticides and no herbicides. Then picked red, ripe and juicy plus full of flavor because they are vine ripened! 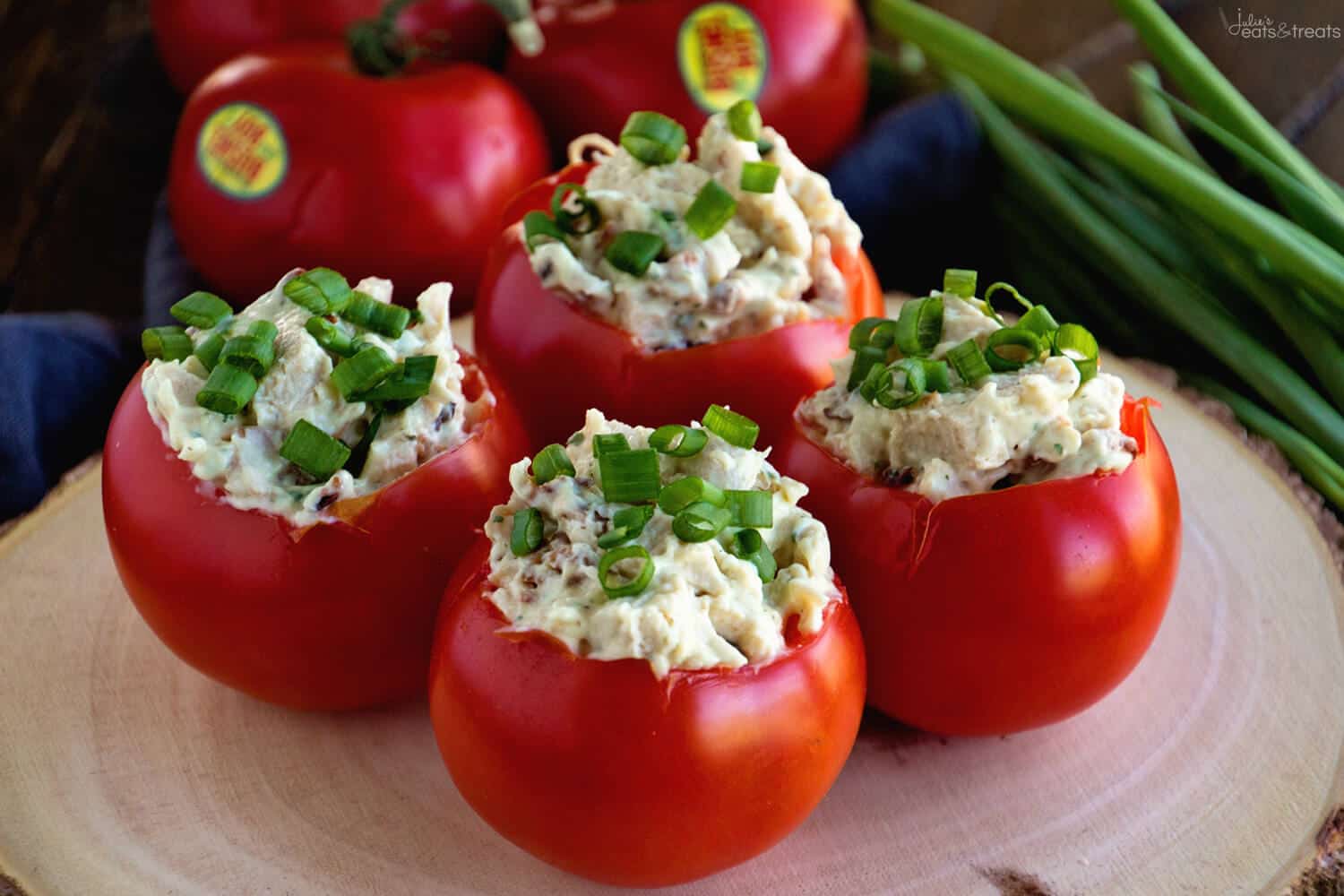 Now let’s talk about this Bacon Ranch Chicken Salad Stuffed Tomatoes Recipe! Summer also means we are a little more concerned about our waistlines here in Minnesota because we aren’t hiding under bulky sweatshirts anymore.

I’ll be honest about this. I may have just may have turned up my nose at Chicken Salad before I made this recipe. I know. Craziness. For some reason I associated it with something my grandma would have ate. I have no idea why. I don’t even know if  she ever ate it!

This is not your Grandma’s Chicken Salad peeps. It’s hip and delicious. Plus, it’s lightened up with Greek yogurt instead of heavy on the mayo. Don’t worry I snuck a little in for flavor. My mouth is just watering at the ranch and bacon mixed together because that’s always a home run! Stuff it into these plump, juicy Bushel Boy tomatoes and you have yourself a light, healthy, low carb lunch, perfect for the summer!

Grab a bowl and whisk together the mayonnaise, yogurt, Dijon mustard and ranch seasoning until combined.

After that you will ad the chicken, bacon and green onion and stir until combined. Put the mixture in the refrigerator for 1-2 hours to let the flavors combine.

Take the tomatoes and cut the top off. Core the middle to remove seeds. Stuff the tomatoes with the chicken salad mixture.

Garnish with green onions and serve!

Looking for Bushel Boy Tomatoes? Check out their Vendor List!

This is a sponsored conversation written by me on behalf of Bushel Boy Tomatoes. The opinions and text are all mine.

END_OF_DOCUMENT_TOKEN_TO_BE_REPLACED

I'm here to help you win in the kitchen again! Life is Busy, Life is Crazy, but that doesn't mean you can't make your family dinner! Julie's goal is to provide you with easy, family, friendly recipes that use pantry staples. Dinnertime will be stress free again!
More Recipes
4425 shares