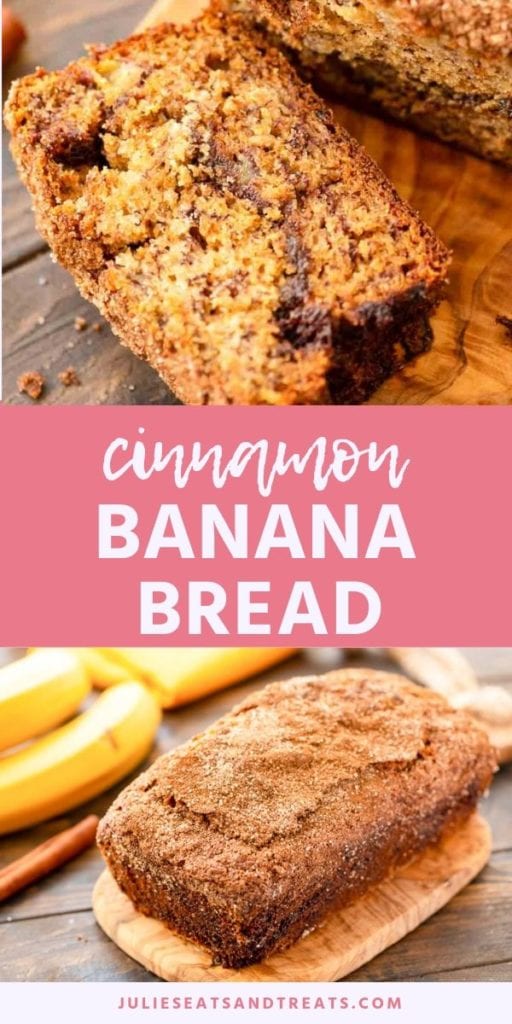 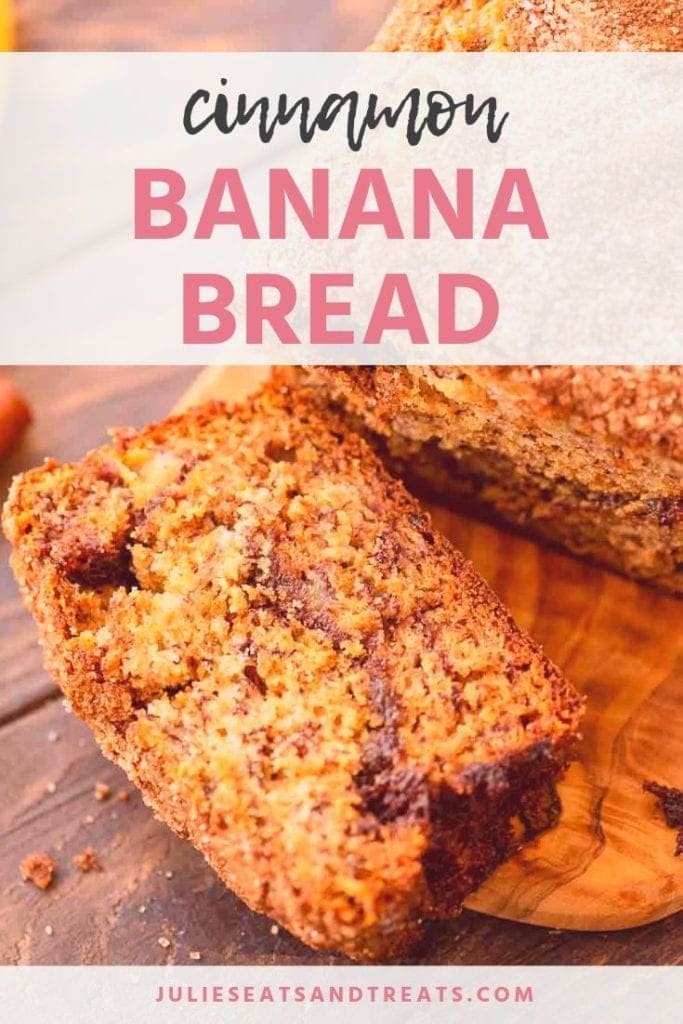 Cinnamon Banana Bread is a family favorite! Tender, soft homemade banana bread with a cinnamon swirl and topped with a cinnamon-sugar mixture. It’s the perfect breakfast or snack. Nothing beats a warm slice with a slab of butter. Mix up your banana bread recipe with this easy recipe! 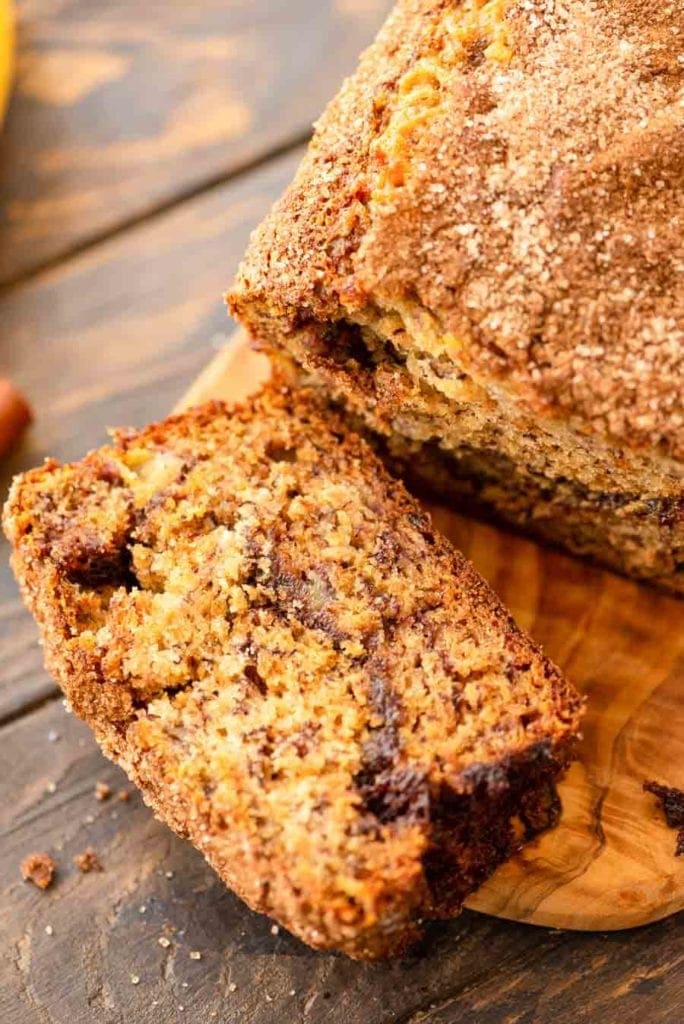 Okay, so I figure everyone has a basic go-to Banana Bread recipe so the question I have for you is when’s the last time you switched it up? Don’t get me wrong, classic banana bread is a wonderful thing, but even our most beloved recipes can get, well, a little boring sometimes! You guys know I’m all about taking favorite recipes and giving them a twist, so I introduce to you this Cinnamon Banana Bread. It’s everything you love about banana bread with a cinnamon upgrade. It’s perfect for fall! Have a slice with a hot White Chocolate Latte or Caramel Latte and your kitchen will feel like a fancy coffee shop!

This banana bread is all about the cinnamon. We’re not just stirring some into the batter – no, we’re creating a cinnamon swirl inside the bread! It’s actually a cinnamon-sugar layer that looks beautiful when you slice the bread and it gives the bread so much flavor. The top of the bread also gets a sprinkling of cinnamon and sugar so when it bakes up you get a crust that has a crunchy sugary texture.

Is there anything better than fresh-baked bread? Especially in the fall and winter when all you want to do is curl up and be cozy, right? If a bread could be described as “cozy” it would be this Cinnamon Banana Bread! So, are you ready to up your banana bread game? I’m pretty sure this recipe will be a new fall favorite! 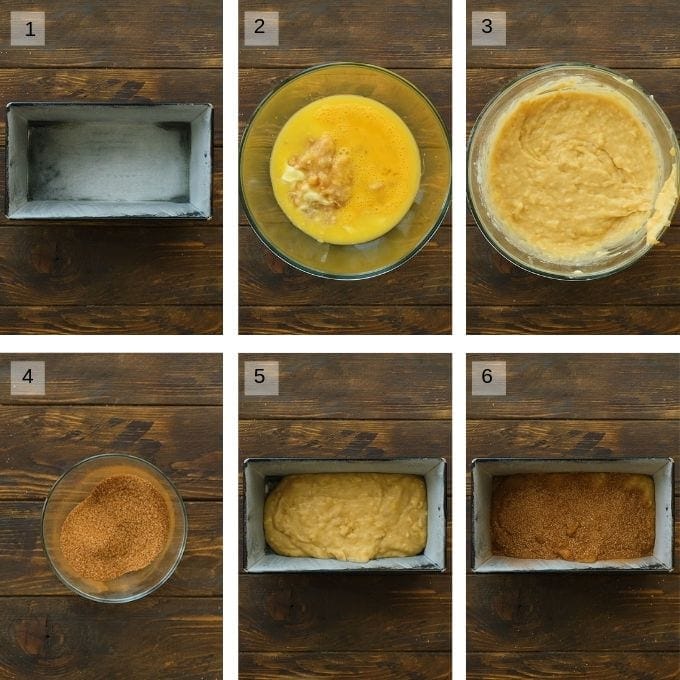 What ingredients do I need for Cinnamon Banana Bread?

If you’d rather skip my (very helpful, I think) tips and tricks, essential cooking info, and similar recipe ideas – and get straight to this delicious Cinnamon Banana Bread recipe – simply scroll to the bottom of the page where you can find the printable recipe card.

How do I make Cinnamon Banana Bread?

What tools do I need to make Banana Bread? 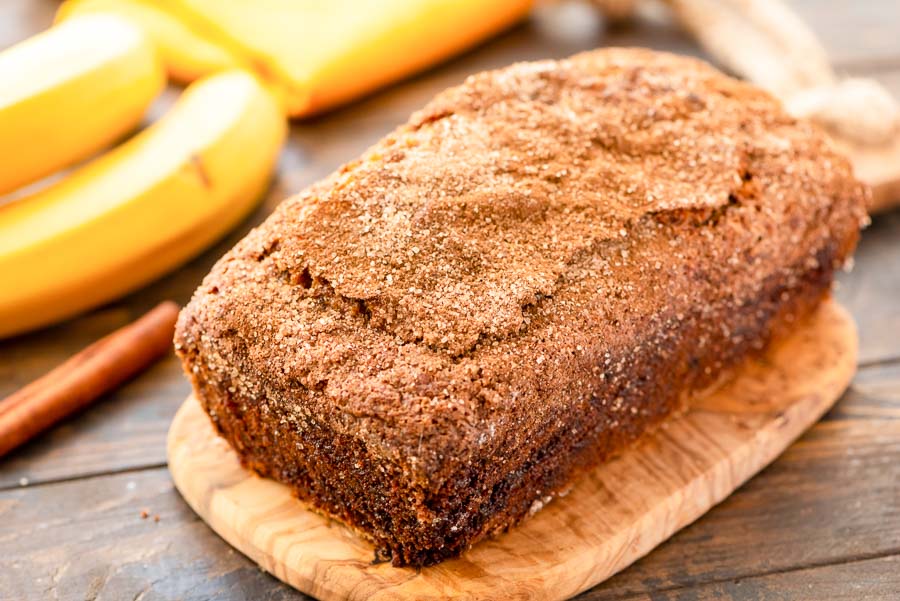 Why do you use overripe bananas for banana bread?

Overripe bananas are great for banana bread because the flavor is intensified as the banana ages. You know when a banana is overripe when the peel has turned dark brown and the inside is very soft and pale brown. Overripe bananas are sweeter, too, plus they are easier to mash.

I keep bananas on hand for the kids and there’s always a few that end up too ripe to eat, so those become banana bread! If you have some bananas that aren’t overripe and you want to speed it up, place them in a paper bag for 12 to 24 hours. They will ripen a lot faster!

Does cinnamon go well with bananas?

Yes, cinnamon and banana is a delicious combination! A lot of regular banana bread recipes have cinnamon, but for this recipe, we’re amping up the cinnamon flavor.

Can I substitute Bisquick for flour in banana bread?

You can’t use Bisquick as a substitute for all-purpose flour in this recipe without adjusting the other dry ingredients. Bisquick is a baking mix that already includes flour, baking powder, shortening and salt. If you use it in place of flour the bread will not turn out right.

Can banana bread be made into muffins?

Yes, you can make muffins with this banana bread recipe! Typically, four cups of quick bread batter is enough to make a dozen standard-sized muffins. You will need to adjust the baking time if you make muffins. I haven’t tested this recipe as muffins, so my best recommendation is to bake the muffins for 30 to 40 minutes. Or, try my Crumb Banana Muffins!

It will depend on the recipe, but most banana bread recipes have sugar and other ingredients that some don’t consider healthy. This recipe has about 397 calories per slice, so keep that in mind! If you are looking for a lighter recipe you might like to try my Healthy Banana Bread recipe which has fewer calories and less fat.

I love making quick and easy bread recipes for my family. Here are a few of my go-to recipes!

If you LOVE banana bread as much as I do you will want to check out these other delicious twists on it!

WATCH THE STEP BY STEP VIDEO FOR THIS CINNAMON BANANA BREAD RECIPE BELOW:

I’d love it you would rate this recipe!! A five-star rating will make my day!

Adapted from: Lovin’ from the Oven

END_OF_DOCUMENT_TOKEN_TO_BE_REPLACED

I'm here to help you win in the kitchen again! Life is Busy, Life is Crazy, but that doesn't mean you can't make your family dinner! Julie's goal is to provide you with easy, family, friendly recipes that use pantry staples. Dinnertime will be stress free again!
More Recipes
2984 shares